"Welcome Baron, I see you brought you Human Computer to this meeting. Note m'Lord is suspicious of persons to similar to the dreaded Thinking-Machines of yore. We will be keeping an tight eye on him for security reasons. One mistake in our eyes and you'll be hauling that robot back in pieces."

Today we'll be exploring the Human Computer character class (which is obviously inspired by the Mentat from Frank Herbert's Dune). I had a lot of fun figuring this class out, and as always these ideas are still evolving. So with out further ado lets dive in.

You are a walking information database in the guise of a human. You are the result the Hundreds Year War against the Thinking-Machines and the inevitable evolution of mankind. You're an adviser to a Great or Minor House, a ware strategist or calculated and skilled assassin.

With the ever present fear of a resurgence in Thinking-Machine rule, no Great or Minor House is complete without at least one Human Computer. Through compartmentalizing your brain you are able to function just like a machine while retaining a level of humanity the cold bodied machines cannot.

With enough information you can enter a Processing Trance in order to come to a decisive and correct conclusion of any situation.

Alignment: Human Computers are usually Neutral. In that way they can see every side of a situation to determine the best outcome and are not skewed by their own judgement. Human Computers may however choose to be Lawful and will usually show signs of absolute loyalty to the House they have been assigned and may lose sight of  a situation as a whole, adding penalties to their Processing Trance checks. Alternatively, Human Computers that have been twisted will become Chaotic, choosing then the best outcomes that suit their needs and suffering penalties to their Processing Trance checks.

Depending on the outcome of the check, positive or negative modifiers will be added to the situation throughout the adventure until another Processing Trace check with new data can be made. If the outcome was positive these modifiers are provided in the form of a Data Die according to the level of the Human Computer.

Action dice: A Human Computer use his action dice for attacks or processing trances.

I really can't wait for the day when I can finally play-test these ideas. I personally like this class the best of all the classes so far.  Like every class I want to add the ability to use the Fumes (aka the Spice) to aid in the Human Computers processing trance, like the Sapho juice in Dune. 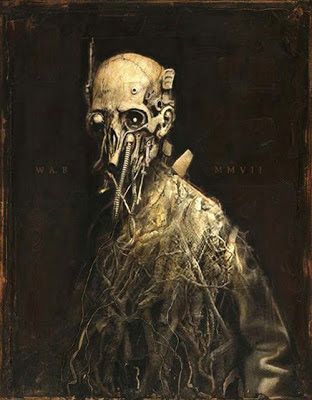 It's been quite a while since I've posted about this side project and there are numerous reasons for that, but fret not I will try and maintain a consistent pattern with these posts.

(Before we start let me point out again that this is an ever changing idea. I have previously written about the spice like substance of this universe called "guzzoline," because I wanted a weird mix of Mad Max meets Dune, but have since changed my mind as it doesn't quite fit the more Dune-eqse vibe I actually want. Hence forth the substance in this universe (which is a vapor or fume from a particular Nebula) will just be referred to as the Fumes.)  Okay... moving on to the first new character class: 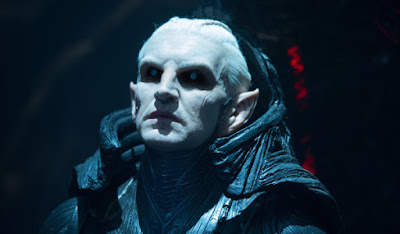 So basically this is the elf class in DCC combined with the Melinboneans from the Elric stories and of course the Fremen from Dune. It won't fully come together until I figure all the other rules changes like Fume Addiction, etc, but for now here it is:

You are a strong, tall and slender race hailing from the Fume Nebula on the outermost reaches of the Known Universe. Your pale complexion shimmers like moon beams and your pointed ears and rippled foreheads give you an almost demonic overture.


Your people, once proud and powerful, have been shunned by the Young Kingdoms of Mankind; whose crude superstitions and warmongering have brought nothing but ruin, and forced your people to become separated,tribal, living in hidden cities buried beneath the asteroids that clutter the Fume Nebula.  Feuds between these tribes is no longer uncommon occurrence.


The longevity of the Felfenkin greatly over extends that of any other race due to their heavy overexposure of the fumes. Highly addicted, the eyes of the Felfenkin have forever been changed, swimming colors of blue and orange. Due to this addiction, the Felfenkin are masters of the Weirding Ways, yet can never be without the fumes or suffer greatly. Therefore, if any a Felfenkin leaves the Nebula they must wear a fume-suit or dwell within a fume-chamber.


The extended lifespan, combined with their strange appearance and Weirding Ways have created many legends about the Felfenkin.  There are many among the Young Kingdoms that believe the Felfenkin commune with entities beyond the veil and that from these strange beings the Weirding Ways originated.


Because of their Addiction Level, Felfenkin characters begin play with a fume-suit.


Patrons: Centuries have past since the Felfenkin taught mankind the art of the weirding ways, but never did they reveal the innermost secrets of their race, nor from where such power originates. A Felfenkin automatically receives the weirding ways invoke patron and patron bond at 1st-level in addition to his other weirding ways.


Infravision: A Felfenkin can see in the dark up to 60'.


Immunities: Felfenkin are immune to magical sleep, paralysis and the voice.


Vulnerabilities: Felfenkin are extremely addicted to the fumes. As such they must always wear a fume-suit or be in a fume-chamber or suffer extreme addiction penalties. (This is something new I'm adding to the rules and will explain at a later time). Prolonged periods without fumes cause 1 hp of damage per day.


Languages: At 1st-level, a Felfenkin automatically knows Common, the Ancient Speech and their Tribe's Dialect.


There are obviously some changes mentioned here.  Some new weapons, spells are now called weirding ways, though in game terms they are pretty much the same, however I am planning to takeout a lot of spells and adding a few new ones in before it's all said and done.

For every character class, not just the Felfenkin, I want using the fumes to aid in their abilities to come with consequences.  I haven't quite figured it out yet, but the Addition Level will hinder that character in some way and it may never be reversed (maybe...). So by the time your character is at 5th Level and you've been inhaling fumes the whole game, you should be in pretty rough shape if you go without it for some time.

Well that's all for today, up next... the new wizard class: The Guild Seer!