It's Cyber-Lich Monday! You know what that means right! DEALS you crazy consumers you!

My 0-level adventure Sky ov Crimson Flame is 40% right now. That's $8.99 + shipping for a copy of the 60 page adventure plus the PDF! On top of that, all purchases will entered into a drawing for a chance to win one of the limited lithographs (see below). 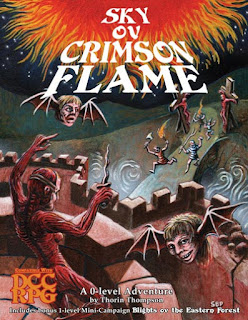 How long had it been since the Owl Knight and the Barbarian left their nest for adventure! Two months? Three? Time was a blur as the long hours trailed in nothingness. Finally though, after reaching a coastal town, fighting a malevolent she-bitch and carousing every bar about the town; the pair were heading back home. Since returning however, both were feeling distant. How do they start where they left off and what does the future hold?

For some of you that follow my other social media feeds you'll know that for the past couple of months I've been working on a film in Atlanta. Though I enjoy my work in the film industry (and it helps pay the bills) it takes me away from all the things I'd rather be doing, such as writing and playing tabletop games. Now that I'm back home I'm hoping that I can push out a lot of content (or at least write a lot) before the next show sucks me into another black hole.

What I'm Currently Working On:

I have several projects that I'd love to see finished. The major one is of course my next DCC adventure Seekers ov the Other Worlds. I really thought I'd have a complete draft by now and even a new Kickstarter going for it, but alas, life had other plans.

On top of that I have several other adventure ideas in the works as well and that whole DCC/OSR Dune thing I was doing.

I've also been working on some board games, one of which I've tried to Kickstarter twice now.

I have a business plan for a bar that may or may not happen and I'm working on getting a cartoon show off the ground.

So yeah... I'm a busy little f*ckin' bee and a little stressed, but it's all gravy baby! So enough talk! Lets get to work!