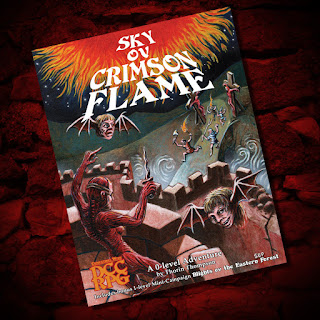 Our story unfolds with the sudden disappearance of the raven-haired beauty Belesa and soon turns to hysteria as other vanish from the small farming village of Reed. One by one, friends, loved ones and finally the children scream out in the dark of the night and are lost...

Now, as the Horned Moon rises, a thunderous sounds ripples across the night sky and in its wake a falling Crimson Star ignites in the East! The village elders suspect the kidnapped have been taken to an ancient and vile Keep that lies hidden within the dreaded Eastern Forest, for they alone remember the old tales of screaming witch-lights that blazed and dance across the sky in times of yore!

Even now strange ululations cry out as fleeting shadows ride the wind. Who among you will brave the bowls of that foul Keep, where unspeakable horrors must surely await, in an attempt to save those that have been taken? 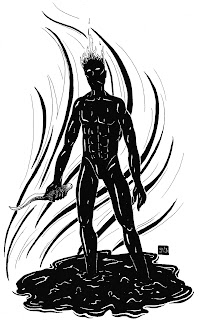 This adventure also features the 1st level mini-campaign Blights of the Eastern Forest:

What is it that turns a land sour? What evil breeds and lurks under the dark boughs of the Eastern Forest, that has generations cast a shadow of dread over the village of Reed. Is it possible a band of adventurers, stout of heat, body and mind, can put an end once and for all to the corruption that dwells there? 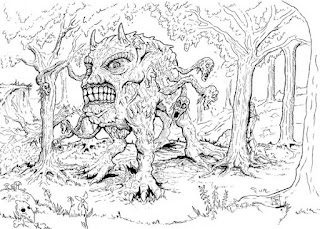 Blights ov the Eastern Forest sends your adventurers on a dangerous mission to cleanse the evil that spawns from the very roots of the wood, weaving a rich history that ties in elements of the previous adventure with a map, six new areas to explore and a bestiary of horrors to encounter! Walking into the forest is easy, it's getting out alive that's hard!

Compatible with DCC-RPG by Goodman Games