A Taste of What's to Come!

I've finished my revisions for my first adventure; a zero-level funnel for DCCRPG tentatively entitled Red Flame Resurrection.  As of right now the draft is a solid 14 pages, features 2 fun random tables and 15 areas.

Here is a snip-it from the beginning:

It started with the disappearance of Belesa, the raven haired beauty with jade eyes, then others began to disappear.  Finally the children were snatched out their beds in the dark of the night.  Many suspect they have been taken to the ancient Keep that lies hidden in the hills of the Eastern Forest, for tonight, a strange ululation catches the wind as Red Star falls between a Horned Moon rising.

You brave souls are all the village of Reed could muster in a vain hope to save those that have been taken.  Together you steel yourselves as you trek up through the hills of the Eastern Forest where the pines sway eerily in the waning moonlight and weird voices rises and fall in unison sending chills down your spine.

Shadowed bulbous shapes with wings flop and flutter over the pines towards the old Keep.  Soon enough a gruesome sigh befalls your eyes!  Two villagers, their flesh torn away from their bodies hang crucified at the threshold of winding and jagged stone steps that twist up and over the cliff sides to the Keep's front gates.  A grand pyre blazes in the last standing tower towards the back of the structure and a silhouetted figure is glimpses dancing around it.


Now for another couple play-tests and we'll be ready for the next phase!
at August 26, 2015 No comments:

Well, since you asked... Hello!  I am Thorin Thompson and I alone am Owl Knight Publishing [OKP].  Just me, for now anyways, and those I can persuade to help in this endeavor.  OKP grew out of my addictions... I'm my happiest when writing, rolling dice, and killing PCs.  Thus I have formed OKP so I don't feel like I'm wasting my time when I come up with adventures to run my friends through.  Now I have a reason and that reason is to get it out into the public's eye.

I was, like many during that dark 4th age of role-playing, in search for something different.  I had grown up under my Father's wing playing the 1st and 2nd editions of Dungeons & Dragons, but didn't just want to go back to that.  I never got into 3rd edition or Mathfinder and the less said about the 4th rendition the better.

That's when I stumbled upon the OSR!  Here are like minded individuals that wanna play RPGs the old school way.  A crazy concept to be sure!  I devoured the blogs and posting within G+ communities and it was then by chance, or fate, Goodman Games Dungeon Crawl Classics RPG came to mine eyes.  I've been enthralled ever since!  I had to play it, had to roll up characters and monsters, but most importantly I had to do it now!

That was about two years ago.  Since then I've judged many a game and drawn many a dungeon and thought it was time I'd share these adventures with others.  OKP is the means by which I will do it! 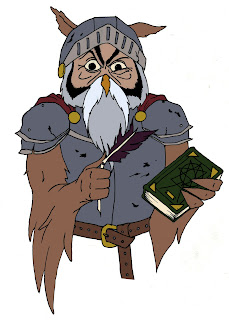 Why an Owl Knight?

As they say in Twin Peaks, "The owls are not what they seem..."  Owls are my spirit animal (if you believe in such things.)  I've had a couple of strange encounters with owls just swooping down and landing by a branch or fence near me, staring into my soul and then taking flight again.  Dreams of owls flutter through the brain and the trees around my house.  You can find Owl totems scattered throughout my room and in my pockets.  I guess I've just always been fascinated with them and maybe they with me.

Owl was also my favorite character from Winnie the Pooh.

And since I'll be writing mainly fantasy adventures this owl of mine (who still needs a name) most certainly needs to be a knight, right?

I have a background in film, writing, editing, directing, acting, all on a low-level.  I've written several screenplays and have even gotten one produced.  A real no budget b-movie called Portrait for Hell. (You can search for it or it's other edit entitled Oil & Blood.)

Currently I've been working on a cartoon show with my writing partner that is slowly moving forward into the next stages of development.

Having always been into RPGs and board games I feel I've been destined to write gaming material.  For the past couple of years my Father and I have been working on a war game called Assault on Fortress Moon and while we wait to play-test some new ideas on that I figured I'd not sit idle and wait.

Publishing is new to me, but I'm a crazy perfectionist and so I'm going to try my damnedest to make this material look as good as it can.

For the past several weeks I've been working on a zero-level funnel tentatively titled Red Flame Resurrection, based off the very first adventure I ever ran for DCCRPG.

I have another 3rd Level adventure and another adventure (for what level I don't know) and finally a quarterly zine I'd like to develop.

So there's lots of ideas and I hope that I can get them off the ground sooner rather than later.

Now that you know HOO! Owl Knight Publishing is I hope you keep in touch and I look forward to sharing more ideas and adventures with you in the near future.
at August 20, 2015 No comments: