It's been a while since I've worked on this idea and with a new film releasing, someday post-covid, and bringing in more added interest to the subject matter I figured now is as good of a time as any to begin again.

DCC-DUNE or as it's tentatively titled Feudal Universe will hopefully be an up coming zine for use the with Dungeon Crawl Classics ruleset. See I've been huge Dune fan ever since I'd laid eyes on David Lynch's Dune around the age of 8 or so. And while that particular rendition doesn't follow the story as well as others, the ascetics really stuck with me and it was the major reason I decided to read the books.
Now one might argue that Dungeon Crawl Classics and Dune don't really mesh well and frankly they're probably right. There's a lot of subtle political and religious nuance that comes with Dune and one could argue that a more story-driven RPG would evoke the correct feel. To that I'll argue that all those ideas can be accomplished through role-playing as opposed to game mechanics. None-the-less this campaign setting I wish to write isn't suppose to be an exactly replica of the Dune universe but merely inspired by it, a "what if Dune was in Appendix N with the rest of the bunch" mixed with other sci-fi films, and blended all together with medieval fantasy and heavy metal!
So without further ado, here lies the History of the Feudal Universe: 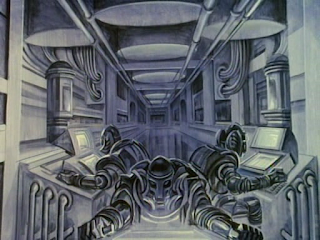 Once, long ago, there was peace and tranquility across the entire universe. Every machine had a purpose and worked in conjunction with every other machine to produce Harmony. The Thinking-Machines, aware of the destructive nature of the species, kept the remnants of mankind enslaved for their own safety. All was as it should be.

Then seemingly without reason what is now known as the Great Glitch occurred. It’s effects rippled across the machine empire of Harmony and the Thinking-Machines developed a programming akin to arrogance. Whole sections of Harmony seceded from the rest, forming intelligences that differed from the norm. The inner turmoil between the separations halted the expansion of the empire, and the deeper reaches of space were neglected.

It was there in that dark and dormant abode that a species was left to evolve. A tall people with pale complexions like the radiance of faint moonlight. Their eyes blazed with the light of miniature galaxies, swirling clouds of orange and blue. Their brows furrowed in several small ripples, giving them a sinister look even more so defined by their sharply pointed ears. They are known as the Felfenkin, who in time would help to free the enslaved human race from the clutches of their Thinking-Machine overlords in a holy war that would last for a hundreds, and would eventually lead to the downfall of both Thinking-Machine and Felfenkin. 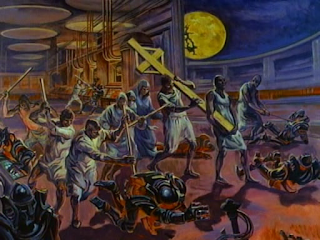 The Hundred Years War began with skirmishes at Thinking-Machine complexes on the outer-rim. There the Felfenkin, with the help of newly freed slaves, crushed any machines in their path. The battles would soon escalate as more freed humans took command and led assaults on entire machine worlds. The Felfenkin, after much debate with their kind, decided the only way to defeat the Thinking-Machine empire was to teach the human race how to expand their minds, and enhance their bodies using a substance the Felfenkin merely called the Fume. This strange substance bestowed long life to the Felfenkin, and when exposed to humans showed unlimited potential.

Fume soon became the most precious resource in all the Known Universe.  In time, and after much over-exposure to the Fume, the Seers, as they are now named, discovered a means to fold phlogiston. After re-purposing machine factories, the humans were able to produce large warships that could assault the inner worlds of Harmony, and with the help of the Seers unpredictable ability to jump through space, began surprise blitzkrieg attacks, which ultimately turned the tides of war in their favor.

As the seemingly never ending war waged technology lessened, and many marvels were lost. Eventually whole star systems were separated, and fledgling human kingdoms began to spring up. When the war finally ended at the Bridge of Leng-duun, it wasn’t long before another began between the squabbling humans for supremacy over the Known Universe. The Felfenkin, having no want for rule, attempted to persuade the humans against sparing, but seeing the Felfenkin persuasions as a ruse to steal control and re-enslave them, the humans turned on the people that first helped free them, driving the Felfenkin into the deep recesses of space where they have dwelled ever since.

In those early years, with many small kingdoms sparring for rule, the kingdom that could refine the most Fume would eventually win the throne, unifying the sparing houses under the monarchical banner of the One & True Sanctified Emperor of All. A Landsraad was formed so that all Houses under the rule of the Imperium could have a voice. The Temple of the Golden Flesh, a strict religious faction that had risen in the ashes of the Hundreds Years War, decreed that, “All machines made in the likeness of the mind and body of man were forbidden under penalty of death.” Prosperity soon brought the construction of the Great Schools that continued mankind's evolution, and many that now lived no longer remember these teachings were originally gifts from the Felfenkin who, though not exiled entirely from the realm, were now shunned by all mankind with fear and mistrust.

To control such a vast and varied universe the Emperor of All formed the Landsraad; where all Great and Minor Houses in the Imperium may debate. There are currently 7038 representatives, each from either a Great or Minor House and each seeking the good graces of the One & True Sanctified Emperor of All in the hopes of obtaining a Fume fiefdom. 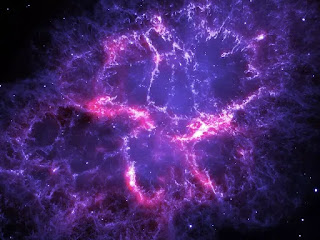 Sparse and varied, these nebulas house the strange substance known commonly as the Fume. The Fume is neither liquid nor gas, yet contains properties of both, and is used throughout the Imperium in order to enhance both the mind and body. Every Great and Minor house strives to be granted a Fume fiefdom from the Emperor of All and many an Assassin’s War, if not outright conflicts, have started for such pursuits. The Fume is highly addictive and causes the user’s eyes to change into a swirling mix of orange and blue.

Within the Fume Nebulas are behemoth beasts known as Galaxorms, great worm-like creatures that “swim” through the nebulas devouring anything in sight.  There have been limited studies of the Galaxorms, but it appears the beasts are attracted to the Fume, and possibly have some connection to its creation.  Many Fume refineries have been destroyed from Galaxorm attacks resulting in the nebulas becoming cluttered with an abundance of debris.

The Fume nebulas contain several hundreds if not thousands floating asteroids. Most refineries are built on these rocky surfaces and, unknown to many, the scattered and tribal people of the Felfenkin build their cities beneath the surface of these asteroids.