It's time for another recap (before I forget most of details!). This time I'll be focusing on my Blights ov the Eastern Forest session. Lets begin!

A Merrily to Our Deaths Do We Go!

Knowing how deadly the forest could be I decided that each player should have at least two 1st level PCs. Almost every player decided to roll up a wizard/warrior combo with not one Cleric among the bunch! (Note: We decided to use the Luck rules for healing via the DCC: Lankhmar boxset.) I provided the group a map of the Eastern Forest, something one of the wizards had acquired from the Elders of the nearby village of Reed. The conclave of wizards huddles up away from the warriors and other vagabonds of the party to discuss their next move and decided that from what they could gather about the Wrook (a soul stealing fiend) there was bound to be some sort of treasure or magic to be had at his hut. So without further a due they ventured into the forest.

Fortunately for them there were no random encounters to be had on their journey (For this session I didn't roll 1d6 for every hex as the adventure says). After about half a days march the branches of the forest began to be filled with hundreds if not thousands of murderous looking crows, much larger, uglier than one's average avian. Though the birds did not bother the party, they did continue to swoop down from their branches every once in a while and called out continuously, creating quite the  cacophony of sounds, and unknown to the party alerting the Wrook that someone was approaching his hunt.

When the party finally made it to a the clearing in which the hunt sat, one of them, at the direction of a wizard no doubt, decided to sneak up to the hunt to take a peak behind the leather straps hanging over the doorway. Before that character could make it halfway across the clearing the flock of crows began to attack! A battle ensued and which things were looking pretty dire for our heroes! A pair of 0-level villagers came running into the forest to help (one of my players arrived late and rolled up 0-level PCs instead of 1st level!) and one was immediately killed! (That player rolled up another 1st level character, who was also slain I believe.)

Eventually using a bit of magic, and the luck of the halfling, the party was able to scare off the majority of the crows. After assessing their wounds they entered the hunt and found a treasure trove piled around the edges of this dirty abode, but something sinister lay in the nest of the next room. (Here I should add that one of the character had a goose they would honk if danger lurked by, or so that character believed his goose did...)

In that room was a nest with 13 two foot tall black eggs. Ghostly faces could be discerned swirling up to the semi-transparent edge of the eggs. Like any good wizards of ill repute, one of them took an egg and stowed it in his backpack. Just as they were about to destroy the eggs and grab the treasure the Wrook arrived in a torrent of feathers, calling them thieves and vagabonds and promising to take their filthy souls to add to his collection! 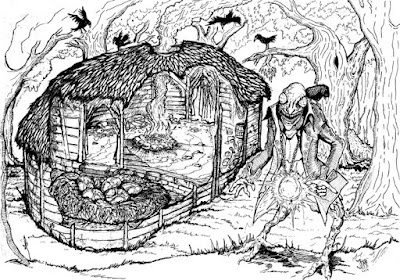 Unfortunately for the Wrook (aka me, the Judge) I rolled far too low on my initiative and they party was able to get many a whack in, summon a wolf to bite the Wrook's chick legs and popped out one of his golden eye balls. (In retrospect maybe I should have allowed this "big baddy" 2d20 action dice...)

Before he could suffer anymore damage he fled his hut vowing revenge on the party and took off in a storm of wind and feathers to the East! The party, suffering few losses took up as much gold as they could carry and headed back to the village to rest up till their next outing of which was decided to be Jumbii-Beyr Glen, but that is for another post!
at April 26, 2020