For those that don't know me I'm an avid fan of Frank Herbert's Dune. I have read every book, including Brian Herbert's. I've watched the film and yes I enjoy David Lynch's film (if it's the fan-edit that makes it less of a travesty, but less be honest, it's more about the aesthetics anyways). The universe is vast and amazing imagination fuel. It is to science fiction what Lord of the Rings is to fantasy and I have always wanted to write up my own campaign setting inspired from the novels.

After much debate with myself and attempting to come up with a new style of rules to run a RPG in the Dune Universe I decided to just embrace my current favorite, DCCRPG, which could potentially add further weirdness to the setting. So as I continue to write adventure that I want to publish I will also be writing what I'm currently calling the Feudal Universe and may in time produce a monthly zine based on it.

So without further ado I present the first part which is a short history and overview of the campaign setting. [Note: This is an ever evolving series of ideas, follow the other links provided to read the latest posts.] 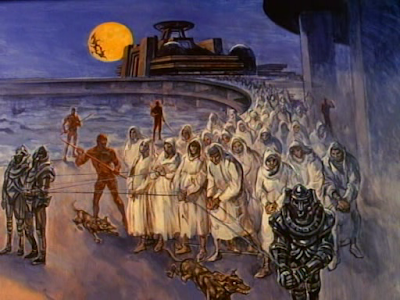 There was once a peace and tranquility across the entire universe. Every machine had a purpose and worked in conjunction with every other machine to produce Harmony. For eons within Harmony were the screams of mankind quelled. The Thinking-Machines, aware of the destructive nature of mankind, kept the remnants of this species enslaved for its own safety.

The Great Glitch occurred without reason and rippled across all of Harmony. The Thinking-Machines suddenly developed a programming akin to arrogance. Whole sections of Harmony separated from the rest, forming intelligences that differed from others. The inner turmoil between the separations halted the expansion of the empire and the deeper reaches of space were neglected. There in that dark and dormant abode, a species was left to evolve.

They were a tall people with pale complexions that glowed with the radiance of faint moonlight. In their eyes was the blaze of miniature galaxies, all swirling clouds of orange and blue. Their brows furrowed in several small ripples, which gave them a sinister look even more so defined by ears long and pointed. These were the Felfenkin, who would help to free the enslaved human race from the clutches of their thinking-machine overlords in a holy war that lasted for hundreds of years and would eventually lead to their downfall. 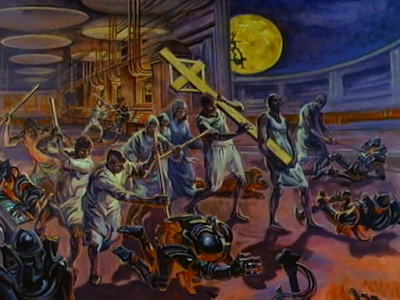 The Hundred Years War began as mere skirmishes on outer-rim Thinking-Machine settlements. There the Felefenkin and the freed slaves crushed all machines into the dirt. The battles would soon escalated as more freed humans, lead by the Felfenkin, assaulted whole machine worlds. After re-purposing machine factories, man-kind was able to produce large warships that could assault Harmony and bring an end to the fighting. The Felfenkin, after much debate with their kind, decided it best to teach the human race how to expand their minds and enhance their bodies in order to continue the war against the machines. A very small percentage of humans, called Seers, showed unlimited potential when exposed to the phumes of a substance called Guzzoline.

Guzzoline, whose strange and alien principals bestowed long life to the Felfenkin, became the most precious resource in all the Known Universe. In time and after much over-exposure to the Guzzoline phumes, the Seers discovered, using the Weirding Ways gifted to them, a means to fold space. Being unpredictable and illogical to the Thinking Machines, folding space allowed surprise blitzkrieg attacks with whole fleets of warships, turning the tides of war in their favor.

As the seemingly never ending war waged, technology lessened and many marvels were lost. Eventually whole star systems were separated and fledgling human kingdoms began to spring up. When the war finally ended at the Bridge at Leng-dun, another started among the surviving humans for supremacy over the Known Universe. The Felfenkin, having no want for rule, tried to persuade the humans against sparing, but the humans, seeing the Felfenkin persuasions as a ruse to steal control and re-enslave them, turned on the people that first helped free them and drove the Felfenkin into the deep recesses of space where they have dwelt every since.

In those early years, with many small kingdoms sparring for rule, it was the kingdom that had claim to the most Guzzoline that would eventually wing the throne and unified the sparing houses under the monarchical banner of the One & True Sanctified Emperor of All. The Landsraad was formed so that all Houses under the rule of the Imperium could have a voice. The Temple of the Golden Suns, a strict religious faction, was formed and decreed that all machines made in the likeness of the mind and body of man were forbidden under penalty of death. Prosperity brought the construction of the Great Schools that continued mankind's evolution and many that now lived no longer remember these teachings were originally gifted from the Felfenkin who, though not banned entirely from the realm, were now shunned by all mankind with fear and mistrust.

To control such a vast and varied universe the Emperor of All formed the Landsraad; where all Great and Minor Houses in the Imperium may debate. There are currently 7038 representatives, each from either a Great or Minor House. Each seeking the good grace of the One & True Sanctified Emperor of All in hopes of obtaining a guzzoline fief. 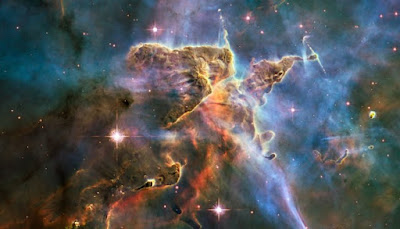 Found in nebula clouds within the deepest reaches of the universe, this strange substance, that is neither liquid nor gas, yet contains properties of both, is used throughout the Imperium in order to enhance both the mind and body. Every Great and Minor house strives to be granted a guzzoline fiefdom from Emperor of All and many Assassin’s War, if not full on conflicts, have resulted for such pursuits. The guzzonline phumes are highly addictive and causes the user’s sclera to turn orange and the cornea blue.

Within the guzzoline nebulas are bethometh beasts known as Galaxorms, great worms that swim through the nebulas. There have been limited studies of the Galaxorms, but it appears the beasts are attracted to the guzzoline phumes and possibly have some connection to its creation. Many guzzoline refinery stations have been destroyed from Galaxorm attacks resulting in the nebulas becoming cluttered with an abundance of debris.

Most guzzoline nebulas contain several hundred if now thousand floating asteroids. Most refineries are built on these rocky surfaces and living unknown beneath the surface are the now tribal and secretive people known as the Felfenkin.

I also plan on changing some of the terms such as: