Tromping through the Shudder Mountains, Part 3

When last we left last we left our party, Pinky, the halfling brewer; Hans, the crazed Braar; and Darcy, the elf musician were each re-experiencing their pasts.  Pasts that were either forgotten, never revealed, or buried in remorse.

During an attack by wolves on a babe and a young woman in the forest, Pinky intervened and was stuck down, his life fading...  Han's was trapped in his old farmhouse, his life force slowly being drawn away from the undead corpses that were his wife and son... And Darcy was forced out of the enchanted forest for summoning an evil demon to aid her Father.  She now treks through the gloomy forest, ever wandering, searching for her sister Duneth.  An every present darkness seems to press down on her.

Chapter 2: The Past is but a Dream, continued

As darkness swallowed Pinky, there remained the slightest thread of hope.  Pinky resisted the darkness and forced himself away from death's cold grip.  Suddenly he woke in a darkened room.  Embers smoldered in the fireplace and beside him lay Hans and Darcy.  Realization came slowly... Was he still in the cabin?  Was all he just experienced a dream?

Again coldness embraced him and a shadowy tendril swung near his face!  He quickly back away and saw hovering, barely visible above the others, a great shadow.  Ghostly tendrils of darkness lay over their faces and even in the darkness he could tell they were pale and dying.  He rushed at the tendrils, weapon draw and slashed completely through it.  His blade would be no good here! 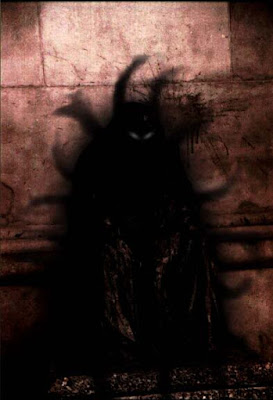 The shadow lashed out for him and with the quickness of a rabbit he maneuvered out of its grasp!  He reached Hans and shook him with all his might, screaming for him to wake.  Pinky could feel his body weakening in the presence of this malevolent shadow with Hans slowly stirred.  Pinky fell to a knee, "Wake Darcy..." he rasped.  Hans, feeling drained as well, moved to wake her.

The shadow moved to ensnare them again, but Hans, using what little faith he had left kept it at bay,  Darcy finally woke and together they fled from the cabin into the night and the torrent of rain.  As they ran, a piercing wail came from the cabin and echoed through the forest sending shivers down their spines.

Without once ever looking back they blundered down the sloping valley and into what seemed familiar territory.  They cross the Old Fords Bridge and enter the town of  Hardscrabble Valley.  Tired and soaked from the rain, they entered the first place they came across, a tavern called The Frozen Axe.  They hardly gave any thought to the building, but knew it hadn't been there a few weeks ago, when they attended Tom Dankers wedding.

The three fell through the door into a pile on the rugged and worn wooden floor.  For being a new building it appeared very old.  At the bar an old man looked up, "Quite a storm out there!  I was just about to close up for the night, but... I still got some hot broth if'n it'll be to your likin'."

The company crawled onto a bench and sat slumping over the table while the old man slowly brought them food and drink.  He passed the mead and broth across the table and Pinky kindly thanked him.  The old man looked at the halfling smiling.  His smile quickly turned to a frown and he dropped his tray, stepping back a bit.  Hunching over and squinting through his glasses he exclaimed, "Pinky?"

Pinky looked at the others, then back at the old man, "Do I know you?"

To be continued in Chapter 3: The Serpents Beneath...