Tromping through the Shudder Mountains, Part 1

The past several months have been exceptionally busy for me.  This unfortunately means, to the distress of my players, I have not been able to continue my campaign through +Michael Curtis' Shudder Mountains.  I thought now would be a good time to recap the adventures my friends have had the (mis)pleasure in playing. 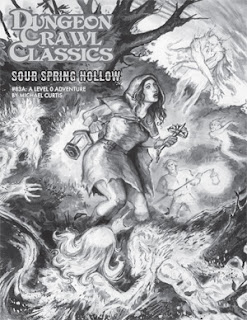 
As with most DCCRPG campaigns, one must start with a funnel and the Chain Coffin Box Set came with Sour Spring Hollow, in which the residents of Hardscrabble Valley were celebrating the wedding of Tom Dankers when they were sucked into a time bubble on some god forsaken farm where they then had to deal with malevolent spirits.  I won't go into all the details, suffice to say only three survived.  Pinky, the halfling brewer; Hans, the farmer turn Braar (Cleric) and Darcy, the elf musician.  [Story note: One of the 0-levels was a witch's apprentice named Margo.]

The surviving characters defeated the spirits and now found themselves on a strange farm somewhere in the Shudder Mountains.

Chapter 2: The Past is but a Dream


The three characters were making there way back to Hardscrabble Valley when they got caught in a storm.  They stumbled upon a cabin and took shelter there.  After searching the abandoned cabin they took watches and the night went on uneventful.

The next day they saw that the town was just beyond the valley and couldn't before be seen because of the storm.  They wandered back into town and explained what they had been through.  The young-man Tom Dankers explained that 6 months had past since then, even though the gang only experienced a day's time passing on the strange farm and weeks time in travel.  Tom Dankers told Pinky, the halfling, to go visit his Grammy as she was worried about him.  They other two party memebers decided to accompany him and when they got to Grammy's she had a supper laid out for them (and had been doing so every night since Pinky dissappeared.) [Story note: Grammy isn't a halfling, she is a human, Pinky was adopted and doesn't know his true parents.]

As they ate dinner, a large orange cat, named Bildad, jump on the table and was attempting to get the party's attention.  Grammy went into the kitchen to get dessert.  There was a long bang on the floor as if she fell and Pinky went to investigate.  The Bildad the cat hissed and slipped out the window.

In the kitchen, Pinky found Grammy splayed on the ground, then she started to change (imagine any scene from John Carpenter's The Thing).  Hans, who's a bit bat shit crazy anyways, rushed in and cut off the Grammy Thing's head, then stuff it in the wood stove.  They were all covered in blood when there came a knock on the door.  Pinky, who was the least covered answer and found Braar Gigger, the town's priest at the door, who just wanted to welcome them back to town.  Seeing the blood he backed up, but not before Hans could drag him inside.  They tried to explain what happen, but when they showed Braar Gigger the body, Grammy no longer looked like a beast.  The Braar suggested they go back to the temple at the centre of the town and sort it all out, but kept his eye on Hans.

They headed to the large pyramid structure that was constructed long before the town ever existed and has now been converted into a Temple of the Sovereign.  Inside Braar Gigger, thinking Hans a cold blooded murdering psycho, paralyzed him with a spell and tried to convince the others that he was mad and was obviously seeing things.

Personally, I'm a little fuzzy on the details here as it was months ago that we played, but Pinky stabbed Braar Gigger in the neck when he was ringing the town bell.

Now the whole town was showing up and they were trapped in the temple.  Bildad the cat appeared suddenly and said, "Follow me if you want to live," as he ran through an open door in the back of the temple.