It's been a while, but I've finally got some time to get "back in the saddle," as it were, with all my writing. For those of you who haven't been following these posts or our just jumping for the first time, Feudal Universe (also known as DCC-DUNE) is a gonzo space faring setting to used with the DCCRPG rules. I'm still working out all the kinks because as one would think, it's a strange combination. Today we'll be looking at the Sister-witch character class and yes you guessed it, they're based off the Bene-gesserits! 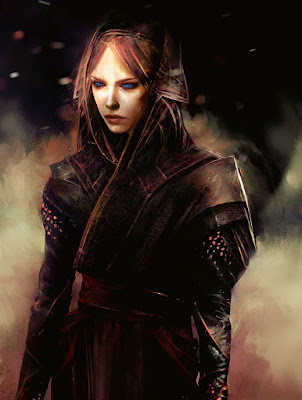 You are a sorceress living among a tribe, a concubine in a Great House, or perhaps a maid in secret service.  Every move you make is precise and calculated towards a specific goal, for above all else you are loyal to one thing, the secret organization known merely as the Sisterhood. Your fellow sisters have infiltrated every facet of the Known Universe and currently pull the strings from behind closed doors. Taken from parents you will never know, your childhood years consisted of physical and mental conditioning that have gifted you with almost superhuman powers. It is because of these abilities and the secrecy of the Sisterhood that outsiders often prefer to call you witches and that suits your needs just fine.

A sister-witch can control the gossamer threads that make up the universe controls in subtle ways using her voice or mind known as the Weirding Ways.  A sister-witch is adept in martial arts and with these combined abilities she makes a great ally or ferocious opponent.

A sister-witch, until proven worthy to become a Reverend Mother is subject to a Reverend Mother and must answer to and perform the duties commanded or face exile. Exiled Sisters lose their connection with the coven and their Weirding Ways suffer for it causing any spell to be cast using a d16.

Weapon training: A Sister is trained in the use of the blackjack, club, dagger, flip-dart, gomjabber, hidden poison, kindjal, needle-gun, shig-wire garrote, staff, and throwing knives.

Alignment: The Sisterhood as a collective are Neutral. There purpose is merely to observe and guide the Universe along the right path (as long as that path is chosen by The Sisterhood). Every option is open as long as the ultimate goal is achieved and the Sisterhood is benefitted.

Weirding Ways: Unlike the Guild Seers, the Sisters are limited in what they can achieve and fear that flaunting their “talents” will show their hand. When casting spells a Sister uses her Caster level and Personality modifier.

Weirding level: Weirding level is a measurement of a Sister’s ability to channel her weirding ways and is equal to her class level.  For example, a 2nd-level Sister has a weirding level of 2.

Action dice: A Sister’s action dice can be used for attack or weirding checks at any level.

(Other weirding ways (aka spells may be added)

Reverend Mother: To become a Reverend Mother a Sister-witch must go on inner quest of the mind in order to unlock the secrets of her ancestors. The inner quest is brought about by an overexposure of the Fumes. The sister-witch does not have to take this journey only however as she is able to project her mind into those around her.

During the inner-quest, the sister-witch cannot be physically harmed as her body, but as she fights the fume exposure her mind may suffer temporary or permanent harm in the form of Intelligence loss.  If the sister-witch dies during the ordeal, she will perish in waking world. Her companions however are merely projections and if harmed will appear to lose hit points and die, but will wake unharmed.

The exact nature of the inner-quest is decided by the Judge, but can be seen as a dungeon crawl of the mind, with some escape which ends the ordeal and changes the character forever. A successful journey will see the sister-witch becoming a Reverend Mother while if her companions complete the journey in full they will see their luck restored. (More on this later.)