Ah yes... GenCon! The gathering of Nerdom from far and wide. Chaos reigns those 4 days and coins are tossed like so much fodder. Those of us who can make the journey wait for an entire year to spend 4 days and nights gaming and drinking in the best of company!

This day started off early with a trip to the DCC gaming room, followed by several hours of work at the Goodman Games booth. Afterwards I had two play-tests of my latest adventure Seekers ov the Other Worlds. 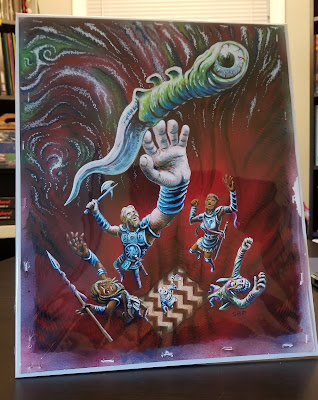 This was the first time anyone has played what I've written and the play-test was only 1/5 of this very long and epic world hopping adventure! I had 6 players, all of whom had some experience with DCC and some of whom I had the pleasure of playing with last year.

After showing off Stefan Poag's new cover art for the adventure (see above) we dove right into the thick of it. This Other World is heavily inspired by both Michael Moorcock and H. P. Lovecraft. It's a very dream like reality and is not the standard dungeon crawling experience. In retrospective though I believe I will need to reign in some of these ideas and add a tad bit more structure to the adventure.

One of the main goals for this session was to find a means of getting the "Bridge Machine" running again. This requires the PCs find the needed parts, putting them in the machine and then activating it so that a black rainbow bridge projects in the direction of the floating tower in the sky. (All of which may change once this adventure is finally published, but that's TBD). Anyhow the players did well and in the end defeated this incarnation of the Necromancer with no casualties (gotta amp those baddies up!).

After that session, I had an hour or more to kill before the next session starting at 8pm. In that time I study the mental notes I'd taken and prepared to try some new things. Again I had 6 players, several of which played with me last year! This session went smoother than the last (mostly in part to the fact I had some practice and knew what the hell I was doing).

One of the main segments that both play-test parties went through was a dinner party with a Minor Chaos Lord named the Duke of Yooh, a slime yellow blob with a hefty appetite. All the players had a blast and both parties manage to narrowly escape the party.

We had but one death in this session (I know, I know... I'm slacking). This occurred in a area called The Great White Void. The character had three chances to roll under their luck and failed all three! In the end they begin one with the void, never to be seen again.

In the end the Necromancer was again defeated and the PCs won! After the session had ended (around midnight) I was feeling quite drained, so of course I went over to the embassy suites to drink and hang out!

So what did I take away from these play-tests?

More structure to the Other World, baddies may need to be amped up a bit, and certain area/ideas should either be combined or abandoned. That said it appeared that everyone was having a blast and dished out some great feedback. So if my play-testers are reading this, thanks for gaming with me and thanks for the support!

Check back later for Part II!