Last week we looked at several new classes (The Felfenkin, The Guild Seer and The Human Computer) for my Feudal Universe (aka DCC-DUNE) campaign setting.  This week we'll start off with The Imperial Medic which could be looked at as a heavy variant on the Cleric class. 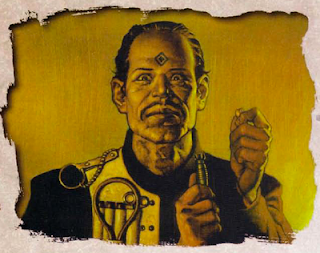 You are a highly valued assist for the House you serve under. Possibly the official physician to the noble line or perhaps a combat surgeon best practiced on the battlefield. Your advance knowledge of the human anatomy as well as your Imperial Mental Conditioning are what separate you from other doctors in the Known Universe as completely and utterly trustworthy.

Weapon Training: An Imperial Medic is trained in the use of the blackjack, dagger, flip-dart, lasgun, maula pistol, needle-gun and stunner; however, because of their Imperial Conditioning can only use such weapons to defend themselves or member of the Noble family with whom they serve. Therefore an Imperial Medic always rolls a d16 for Initiative checks.

Alignment: Due to their Imperial Conditioning against taking a human life, Imperial Medics are always Lawful.

Surgery: Imperial Medics heal wounds using both their medical knowledge and any surgical gear they may have equipped. They may also take a Fume does in order to better concentrate. A Surgery check is made by rolling 1d20 + Intelligence modifier + medic level + surgical gear level (if applicable). A failure further injures the subject causing -1hp of damage and increases the range of condition faltering which may lead to neglect on the Imperial Medic's part (see below).

If the Imperial Medic fails to heal a patient his range of condition faltering increases by 1.

A successful Surgery check is similar to the Cleric's Lay on Hands (see p. 30 DCCRPG rulebook), however, Imperial Medics do not suffer penalties for healing character with different alignments.

Mental Conditioning: This is what separates the average from the elite. It is also what grants the Imperial Medic the right to perform surgery on the House nobles and their subjects. During Surgery checks, if the Imperial Medic rolls a natural 1 their conditioning has faltered and they must then roll on the Neglect Table to discover what has happen.

Luck: An Imperial Medic's Luck modifier applies to all rolls on the Neglect table.

Action Dice: An Imperial Medic can use his action dice for attack rolls or surgery checks.

Neglect Table: Roll 1d10 to determine the effects of neglect.

Next up we'll have a look at the Noble Born character class!
at February 03, 2016